Climate Champion Shout Out to the Anaesthetic Team

As Northland DHB actively works towards becoming a low carbon DHB most people are aware of what we are doing to achieve our target of halving emissions by 2030. We have successfully phased out fossil fuel use in our district hospitals. Telehealth is increasingly being used to avoid travel, and we were successful in a bid for funding to transition half our vehicle fleet to EVs.

One of the lesser-known emissions in the healthcare setting are emissions from medical gases. These are nitrous oxide, predominantly used in Entonox for pain relief and Desflurane and sevoflurane.

Desflurane is used in theatres for general anaesthesia. However, it has a very high global warming potential of 2,540 times that of carbon dioxide. A small bottle of 240ml has the same emissions as driving a car to Invercargill and back to Whangarei.

Our anaesthetic team have spent the last four years working to reduce the use of Desflurane to the point of phasing it out completely to support our organisation reduce emissions. First by improving practices and later with a switch to IV pumps, which has, in turn, avoided the use of multiple 50 ml syringes.

So far, this has saved 587 tCO2e in emissions which is equal to an avoided 2.2 million kilometres driven in a car. Another benefit was a significant cost saving was made with this change.

Ka pai to everyone involved in making this happen.

Besides reducing medical gases, theatres have also implemented a recycling programme for laparoscopic and other single-use instruments like staplers used in surgery. 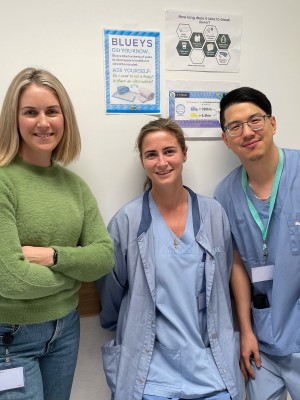 On 22 April, to coincide with Earth Day, the Anaesthesia Department took part in the annual project Operation Clean Up, a trainee-led sustainability event across hospitals in Australia and New Zealand. This year's focus was refusing Desflurane (which we are already achieving), reducing disposable absorbent pads (blueys/greenies/incopads), and recycling where possible.

Blueys and greenies are high-use disposables that can take over 100 years to break down. Its manufacturing process alone has significant potential for polluting air, water and soil through sourcing raw materials, chemical processing, manufacturing and transporting. They were initially designed to reduce the risk of dermatitis and pressure sores due to prolonged skin exposure to fluids but are unfortunately often used for non-indicated uses in clinical settings due to convenience and availability.

On Earth Day, we were able to educate staff around the appropriate use of these items and suggest more sustainable ways to help reduce usage and waste. Some initiatives have already been instituted, including using alternative materials like pillowcases for arm boards in theatre, using old packaging to remove contaminated airways, halving blueys for twice the use and removing them from theatre to reduce accessibility. The day also highlighted the need for more education about recycling in operating theatres and improvements needed to achieve sustainability in healthcare.