Magic Day for Mums and Babies

Well over 100 Northland mothers were out in force today at venues around the region for Big Latch On events to celebrate Global World Breastfeeding week.

The annual event first started in New Zealand in 2005 by Women’s Health Action. In 2010 the rest of the world joined in, and it is now a worldwide peer support and community development event aiming to strengthen national and global support for breastfeeding.  Last year almost 40,000 mothers from around the world latched on over two days.

In New Zealand, thousands of women from different cultures and backgrounds gathered together at over 100 registered venues to access community and peer to peer support and to breastfeed their children.

Isis McKay from Women’s Health Action said they decided in 2014 to go online to respond to those mothers who weren’t able to make to a venue for various reasons and encouraged women to take selfies or 'brelfies' and add them to the Facebook page.   The latch on count includes breastfeeding mothers and also those that bottle feed expressed milk.

Northland DHB lactation consultant Helen Wellington was thrilled with the turnout for the Whangarei event which officially saw 80 mum's latch on 10.30am.

She said the tally was good considering the stormy weather and trialling the new location at Clark Road Chapel in Kamo, which she said was the perfect venue for the mums and their babies.  She was also pleased to see a lot more older children breastfeeding which shows more mums are feeding for longer.

Helen's daughter Kylee Parker has been organising the event for the past five years with Charlene Morunga.  Kylee said they were overwhelmed with the support they received from local businesses who came forward to offer products for spot prizes.

Mum of three Angela Lewis said she calls Helen Wellington, her best friend because without her support, she would've never been able to continue to breastfeed after having issues with her two month old baby Julia.

Latching on has been a difficult journey for Angela and Julia, but with the support from lactation consultants at Whangarei Hospital at least once a day and then continual follow up with her once she got home has meant she is able to breastfeed.  She also regularly attends the free lactation clinics to get ongoing support and meet up with other mothers.

Angela's first two children were born in the United Kingdom during her OE.  She said having a baby here at home in New Zealand is an entirely different experience, with support throughout pregnancy, to the birth and after.

"Today has been magic.  It's such a good community event that brings everyone together because sometimes being at home can be lonely."

Northland has consistently been at the top of New Zealand’s exclusive breastfeeding rates for mothers leaving our hospitals’ thanks to the hard work and support from midwifery, nursing staff, lead maternity carers and lactation consultants.

To support mothers to carry on breastfeeding after being discharged from hospital Northland DHB holds free lactation drop in clinics every Monday, Tuesday and Thursday from 10am - 2pm at Te Puawai Ora at 18 Commerce Street in Whangarei and Bay of Islands Hospital Maternity on Fridays from 10am until 2pm. 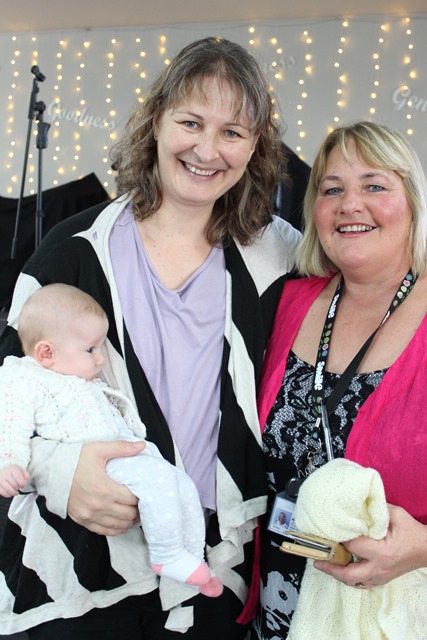