A group of current and former staff who worked in the Hospital during its many life stages, cycles and hectic renovations were invited to a morning tea today (31 March) to celebrate the Hospitals 120-year anniversary, which officially falls on Sunday 4 April.

As familiar faces reconnected, Chief Executive Dr Nick Chamberlain walked through some of the milestones that have occurred since 1901 including when the Cottage Hospital opened at a cost of £1440 and included 2 x 5 bed wards, one for males and one for females and a nurse’s cottage.

In 1950, staff lobbied the board for a swimming pool, but it was not until 1955 that the matron was granted permission by the Board to begin fundraising. Four years and £4,000 later, the swimming pool was opened down the hill from the Maternity Annexe.

In the late 80’s the Nurses Home was converted to offices and renamed Maunu House.  The second nurses home, which had been used as staff accommodation, was converted into offices for the Area Health Board’s newly formed health promotion and planning unit.

The $11m Surgical Unit was opened in 1991 and provided Whangarei Hospital with a modern and spacious six theatre facility.  It replaced the cramped and outdated theatres on level 4 of the central services wing which had served the hospital since phase 1 was built.

New facilities such as the front entrance in 2002, The Mauri Ora Breast Clinic Facility (2006), the moving of the mortuary in 2011, the new mental health unit, Tumanako opening (2011), the Jim Carney Cancer Treatment Centre (2014), Te Kotuku Maternity Unit opening (2016), and the Endoscopy Suite Te Wāhi Tirohia Oranga Whēkau (2020) were highlighted as key achievements across the years.

Opening in May 2021, the new Cardiac Catheter Laboratory and two new Operating Theatres were heralded as the next Capital projects to be completed, but the highlight of the morning tea was the presentation of plans for a completely new Whangarei Hospital.

Northland DHB and the Ministry of Health have been investigating large-scale options for addressing these issues since 2015.

“We understand it is acknowledged that Whangarei Hospital is the highest priority major hospital redevelopment in New Zealand,” said Dr Chamberlain.

“We hope that we will get confirmation from the cabinet of the allocation of funding very soon.”

An investment of $572m would replace a large section of the main hospital block, adds capacity and is a key enabler for our goal of addressing growing health inequities in Northland.

This allows the main hospital to be developed as a series of connected buildings instead of a tall compact tower as in Option 6 and 7. This optimises clinic adjacencies and future flexibility/growth while still providing the opportunity to connect back to the current main campus (which could become a future ambulatory and community zone) via a link bridge across Hospital Road.

An over $500million investment in redeveloping Whangarei Hospital will also be very good for Northland’s economy - for 4-5 years we will have up to 500 extra builders, electricians, plumbers and various specialists working, earning, living, playing and spending in Northland.

“We hope to have good news in the near future so we can start building a hospital that will be fit for purpose for the next 50 years and beyond.” 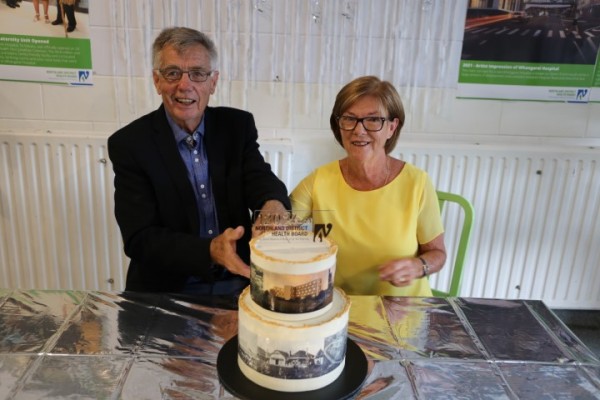