There are not many 11 year old’s that would think about giving up their own time after school every day to raise money for presents for other children, but that’s what Sophie Spijkerbosch from Kamo Intermediate has been doing for the past few months.

After spending a lot of time at the side of her special Aunt Michele who was being treated for lung cancer, then visiting both her father and grandfather in hospital for urgent illnesses, Sophie started to think about all the children who were sick in hospital and she decided to do something to help make their stay a little bit easier.

Sophie’s mother Megan Spijkerbosch said that she was a very focused and organised girl.

“She put a lot of thought into how to fundraise some money and came up with the bright idea of having a raffle.”

She approached Countdown in Tikipunga and Coin Save in Kamo on her own to ask if they could contribute to the raffle. Then with some extra goodies from her sick aunt, Sophie was able to make up four gift baskets to raffle.

She then started door knocking every day after school for months to sell her tickets, which Sophie said was fun, “except having to go out in the rain.”

She managed to raise $280 from the raffle sales, with the winning ticket going to a woman who is currently caring for her mother who has cancer, which Megan said made them feel a real connection to what they were doing.

“The whole process has been something positive for the family to focus on during a difficult time,” said Megan.

Once the tickets were all sold, Sophie realised she needed to buy gifts that would be appropriate for children to play with in bed.

“She’s a real lover of slime, but she knew that wouldn’t work, said Megan.

“We needed to make sure we had heaps of gifts and had to make the money stretch.  She has done so well and she’s pretty much done it all herself.”

Sophie was able to buy Rubix Cubes, colouring-in books, stories and jewellery making kits.  She then divided them into colour coded categories, for younger and older children, gift wrapped them and then was ready to hand them out to the children on the ward. Because she had so many gifts, some of the siblings in the playroom were lucky enough to receive a present as well.

Sophie said that she felt cool giving out the presents and that it was fun.  “I had 30 presents to give out and I wanted to give the children two presents each, but since there are 16 children on the ward, we decided to give some to their visitors as well.”

Sadly, the morning Sophie gave out the gifts her aunt passed away and mum Megan said being able to give the gifts away on that morning made it all that more special as Aunt Michele was the inspiration for the whole project and was so proud of Sophie. 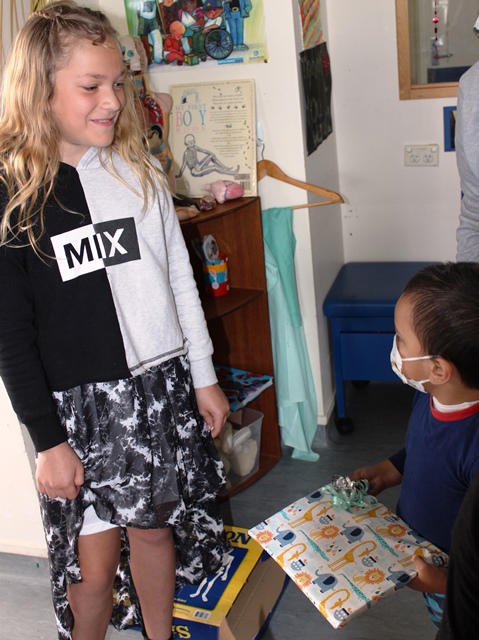