Working with Northland DHB and its IPS (Individual placement and support) team, Sunshine Homes has offered placements to four job seekers, two of whom have begun apprenticeships with the business in addition to work it has done over many years with people via the probation service.

IPS is a specific type of supported employment programme (co-funded by Northland DHB and the Ministry of Social Development) that was originally developed for people experiencing mental health and addiction issues receiving services from community mental health teams. IPS offers intensive, individually tailored support to help people find a job of their choosing, and ongoing support for the employer and employee to help ensure the person keeps their job.

Brett says he was surprised to receive the award acknowledgement.

“It’s just something I’ve been doing for years,” says Brett. “I started taking guys out of probation and those sorts of places 10-12 years ago. It’s been part of my culture all along. I don’t see why I can’t help these guys. I just see them as part of my team.

“If people need help, I send them to get it. It’s all just part of what I do. It’s about trust and being candid with these guys and saying, “we know there’s an issue”. If they can talk openly about it with me then I know I can talk with them about it openly at any stage.

“If you see them struggling, you have to have that conversation with them so you can be open about it if it does become an issue. If they’re open with you and they can trust you that’s half the battle, because you know they’re not going to hide it if they have an issue. It’s a case of following up and making sure that they are comfortable talking about it.”

Brett says he would be happy to talk to other employers about his experience and any concerns they may have about offering similar opportunities in their businesses.

“I’d be quite happy to discuss it with anybody. I believe people deserve a second chance. Whether it’s drugs or alcohol or mental health, they need to be helped through it.”

Brett says that a phone call he got after winning the award from someone he had helped was the best acknowledgement he could have received. “A guy I’d had work for me, he saw the news about the award. He’d been through Odyssey House and called to say thank you to me for having given him an opportunity. That was great that he had seen it for what it was.”

Vocational Professional Leader for Northland DHB, Richard Bell, says that as far as he is aware this is the first time there has been an employer award for supporting mental health and addiction issues in the workplace in Aotearoa New Zealand and he is delighted to see it go to Sunshine Homes.

“We know that employment is a really significant health intervention within the mental health and addictions sector,” says Richard. “It brings mana and a sense of self determination to people, many of whom may have felt a lack of control over their own lives for some time. Employers like Sunshine Homes are crucially important to this process.”

Northland DHB Employment Specialist Leanne Colvin has worked closely with Sunshine Homes placing and providing ongoing support for the job seekers employed there and says that what sets Sunshine Homes apart is that it is open to employing people with mental health and addiction issues and to working alongside the IPS Team to keep employees working.

“They support people through setbacks and help them to return to employment after being unwell,” says Leanne. This sets a strong example that other employers can follow, she says. “If you support your employees through difficult times, they will be loyal hard workers.”

Ministry of Social Development Labour Market Manager, Jamie Rosemergy says that equal access to the job market is a must for everyone, regardless of their health history.

“The IPS programme is proof that there are willing employees across Te Tai Tokerau, who can be matched to life-changing job opportunities.

“In a tight housing market, Sunshine Homes is to be congratulated for contributing to the pipeline of skilled builders who will lift our stock of housing in the region.”

The award sponsor and IPS employment provider in the Mid North and Far North was Te Mana Oranga. Reg Peterson Business Manager for Te Mana Oranga says this award is important because it shows other businesses just how transformational it can be when you support people into employment.

“It’s very much about helping people to get back on their feet,” says Reg. “Employment is often one of the biggest hurdles. We’ve seen the huge impact it makes for them and their families, in terms of maintaining their own wellbeing.

“We wanted to reward companies that have policies in place and that are aware of the challenges that employees face and are prepared to take them on anyway. It was great to meet the finalists and it was hard choosing one as a winner. In fact, for the finalists who didn’t win, we chose to go and give them a gift basket as well.

“When we’re working with clients, it might be just little things that make a significant difference to people like getting into a routine, cooking good meals, getting good sleep, taking their medication. For those that we can support into employment it’s a huge, huge leap forward in comparison to the other steps they’ve taken. It’s just unbelievable how much further they go ahead. It’s incredibly powerful for their family as well – the joy they experience in seeing their family member moving in a positive direction is fantastic to see.”

Reg and his wife Rachel have been running Te Mana Oranga for the last 15 years and say that they would be happy to sponsor the award again. “We think it should be an ongoing and integral part of the Northland Business Awards.”

The final word must go to Eugene Glassco, one of the people who Sunshine Homes employs. “It's like I've been given an opportunity to work with people who can understand what I go through and don't discriminate against the fact that I have an illness,” says Eugene. “I feel grateful for being accepted into their team, which is why I like to work hard for people that appreciate it.” 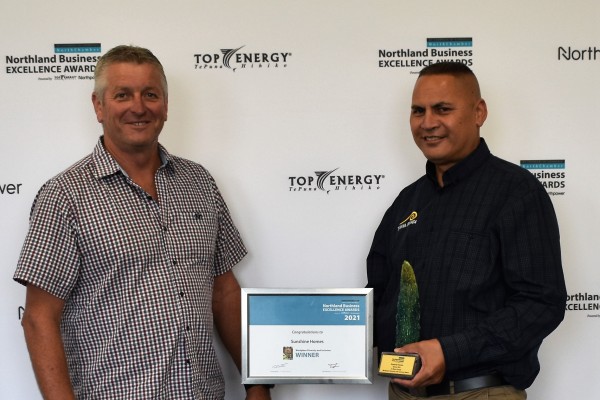 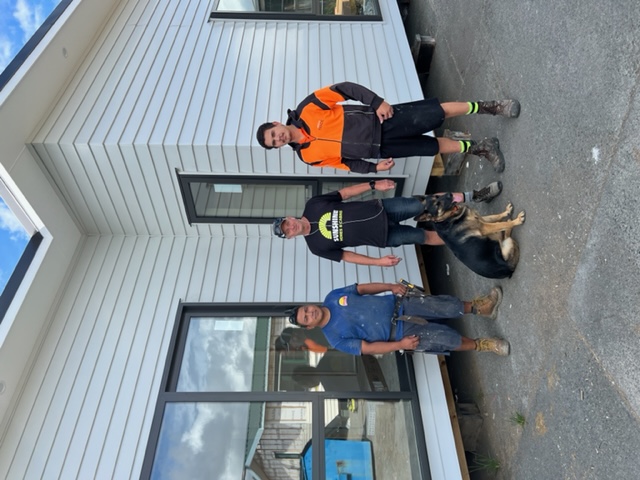 Pictured from left to right are Eugene Glassco, Brett Rodgers, and Jared Engu from Sunshine Homes