Up in Smoke – How much do Northlanders spend on tobacco each year?

This World Smokefree May Toki Rau Stop Smoking Services Northland want to raise awareness of just how much money Northlanders who smoke are actually spending on tobacco in one year. A conservative estimate is around $147,694,353.00.

Using Northland Census data, the Cost of Smoking Calculator[i], the cost of a packet 20 cigarettes ($27), and the average number of cigarettes smoked on per day (14.8)[ii] we were able to work out that 19.1% of Northlanders that smoke are spending almost $150 million dollars a year on tobacco.

When you look at it this way it’s astounding how much money in the region is going up in smoke. That is an average of around $7391 per smoker. Imagine what you could buy for yourself, your kids or your family.

The cost is not just financial. Tobacco is the leading cause of preventable illness and early death. Long-term smokers will die an average of 10 to 15 years early because of smoking[iii]. You simply cannot put a price on that.

To illustrate the amount of money that is going ‘Up in Smoke’ Toki Rau Stop Smoking Services Northland burned cheque at Te Matau ā Pohe Bridge in the carpark area on Port Road, Whangarei on Wednesday 16 May.

“While the government may receive a significant amount of tax from tobacco sales, the cost of tobacco related illness and lost productivity far outweighs the income from the tax. Only a small amount of the tobacco tax revenue is spent trying to get smokers to stop smoking or to reduce the number of young people starting to smoke,” says Bridget Rowse Smokefree Advisor Northland District Health Board.

This World Smokefree Day, Toki Rau Stop Smoking Services Northland encourage everyone to either celebrate being smokefree or encourage those who are not smokefree to embrace the smokefree lifestyle and give quitting a go. 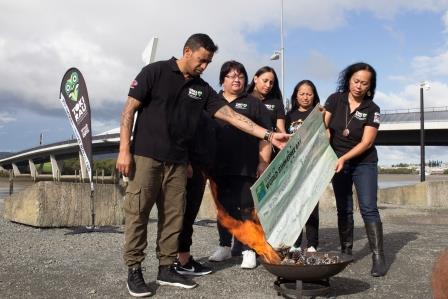