When Sam and Gina Albert from Taiharuru were approached by the Ngāti Hine Health Trust to take part in a movie about their experience with their son’s suicide, although it was raw, they jumped right in. They both felt that it was time to be open and talk about what they’d been through.

With the careful guidance from clinical psychologist and filmmaker Paora Te Oti Takarangi Joseph, the Albert’s say they were able to start the healing process by talking about their experience with the four other families the film documented on their journey from each Marae to Te Reinga Wairua to say goodbye to their loved ones.

“As far as I’m concerned if you don’t talk about it, it just eats you up inside and we thought that if we could get on board with other whanau that had been through it, we could talk about it,” said Sam.

Just months before their son died the Albert’s knew of five other young people that had taken their lives.  When their son passed away they were at their breaking point and thought ‘enough is enough’.

Sam said that Paora and everyone involved in the film showed so much respect and aroha, that it gave him the ability to heal and forgive.

“I said in the film to start the healing process I had to forgive myself. I didn’t believe that I was a good father because my son took his life. I had to forgive my son for what he did. That’s where my healing started through forgiving myself and my son.”

Gina said that she normally is not one to show her grief because she doesn’t like to unload on people, but by taking part in the movie she was able to focus on herself and heal.   “As a mum, we take care of everyone else.  We don’t take care of ourselves.  In the process of ‘Maui’s Hook’, being catered to, not having to cook and just those simple things, I had nothing to worry about.  I looked at myself and that journey was healing for me. That was a blessing for me that I came away from it lighter and spiritually renewed.”

One of the most difficult parts of the movie for the couple to watch was when their daughter unveiled some of her experiences with her brother, which they hadn’t known of until filming. Gina said that although it broke her heart it enabled her to see what her daughter had been carrying.

“I just wanted to hold her and take all her pain and tell her how brave she was for even telling us that. They caught that moment on film and it just broke me.  You can’t hide anything on the big screen. I think whoever watches it is going to see that pain and the love at that moment.”

Paora said he felt especially connected to the Albert’s because of their raw honesty in the film.  “They’re absolutely direct, vulnerable and totally open.  It’s that type of honesty that truly affects people.  It’s not all your prescribed psychological paradigms or methodology or that sort of thing. It’s not saying that you have all the answers, but in your vulnerability and in your honesty the answers come flowing forth from that.”

The film has sold out throughout the North Island and successfully lead on conversations about suicide which Paora says is because the audience feels they have a safe environment to talk about the issue.

“Everywhere the film is going there are people in the room that have been affected directly or indirectly from suicide and if we have that kaupapa on the table, then no one’s alienated and we’re all together and that’s the power. The power is from the people.”

Sam said the whole process made him open up to his whānau, instead of telling them to get over it and harden up.  “It’s made me more soft and open to being able to talk about things with them.  This film needs to be shown everywhere because we’re losing all our young ones.   If you can set up groups with people that have been through it and suffered through it, then it can help people who are too shy to talk about it.  That sort of set up would be awesome.”

Gina feels strongly that suicide is not always really talked about openly and just hidden under the carpet.  “We’ve got to give our children an environment to talk about anything, good or bad and not be judged.  If they are thinking about it, they need to talk to us about it.  We also need to allow them to grieve, but not glorify it – because that’s what I see a lot of.” 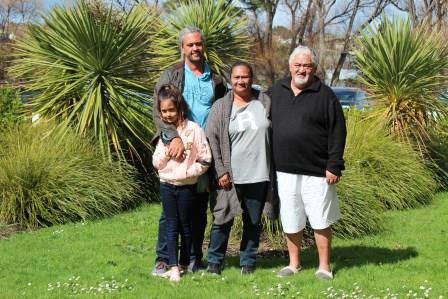 A feature film by Māori psychologist and filmmaker Paora Joseph, director of Tātarakihi: Children of Parihaka, MĀUI’S HOOK is a raw, compelling road trip of loss, forgiveness and redemption. It invites open discussion of suicide through the brave testimony of five grieving families travelling to Cape Reinga. Set alongside the families is Tama, a disturbed young man on the destructive road of no return.

Invoking the skills, cunning and defiance of Māui, the title of the film alludes to the line on a map traced by the bus trip the film takes from Parihaka in Taranaki to Te Rerenga Wairua (Cape Reinga). The travellers who join this hīkoi wairua are five families grieving the suicide of someone close. Their stories give the film its soul-stirring centre.

Joseph conducts and films wānanga with the families as they journey north to release and farewell their loved ones. Addressing the demographic most commonly reflected in New Zealand’s suicide statistics, the story introduces a fictional surrogate in Tama (Niwa Whatuira), who observes the suffering of loved ones left behind and understands too late that while his pain and anger need not be permanent, death most surely is.

The film intends to change attitudes and provoke action.