Using a donation from Mary’s loved ones a special artwork was commissioned from local Whangārei artist Mike Paora, known as “The Sketchy Fulla” depicting a Māori woman breastfeeding her pēpē.

“This image strongly resonated with us as anyone who knew Mary will recall her absolute commitment to breastfeeding for all people for whom that is possible,” says Director of Midwifery and Service Manager Maternity, Sue Bree. “This artwork really captures the beauty of the breastfeeding bond.”

In addition, the team has purchased a large plant to be placed near the painting as a living memorial to their much-missed colleague.

The painting was unveiled on 26 July 2022 with members of Mary’s family present in a ceremony guided by Te Poutokomanawa and attended by some of Mary’s former colleagues.

“It is an honour for us to be able to remember Mary in this way,” says Sue, “and we are deeply grateful for the donation from Mary’s loved ones that has enabled us to do so.

“We also thank the artist for the gift of his time and for providing copies of the artwork for Mary’s family. He too was moved by Mary’s long service to the whānau of Te Tai Tokerau and contributed his time on a koha basis, including framing the artwork in a beautiful totara frame.

“In acknowledging Mary, we specifically thank John Keating, Cedric Ruawhare, The Kerr whānau, the McEwen whānau, and Ange and the Nicholson whānau.”

Mary was a Plunket nurse and also worked as a registered nurse in Whangārei before becoming a midwife. She started work at Te Whatu Ora – Te Tai Tokerau (formerly Northland DHB) as a midwife in May 1997 and resigned in January 2017.

Mary showed a particular passion for supporting breastfeeding by becoming a lactation consultant. Her whānau say that Te Kotuku was Mary’s second home.

“Mary’s whānau understood her passion for providing very good care to women,” says Sue, “especially to young hapū māmā where she felt she could really make a difference by helping them create great attachment and early parenting skills.” 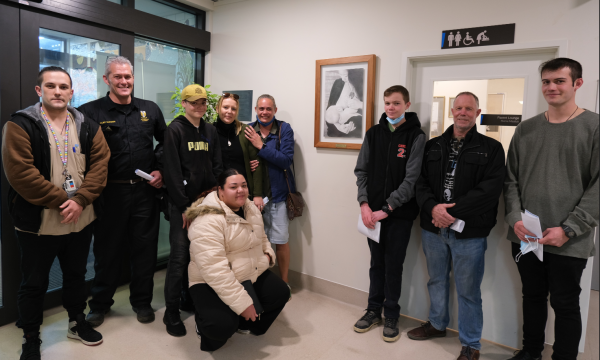 Family, friends and colleagues of the late Mary McEwen gathered recently for the unveiling of an artwork and living memorial funded by a bequest from Mary’s whānau.