Northland DHB’s new general manager Medical and Elder Services, Tracey Schiebli’s primary motivation in life is having a sense of purpose and the reason she has focused most of her career working in health.

The road to where she is today has not been an easy one. 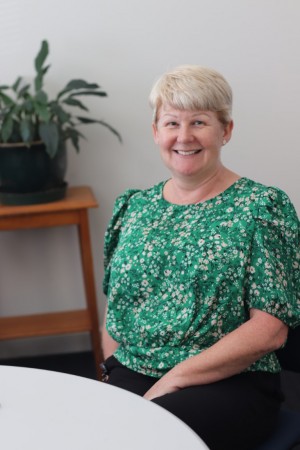 There was an expectation in her family that once you turned 15, you would leave school and get a job.

However, she persuaded her parents to let her stay at school another year to complete university entrance, with strong advocacy from her English teacher.

“My family emigrated to New Zealand under difficult circumstances.  There was a strong work ethic and resilience in my family; however, there was no expectation you would go to university or do any continuing education – it wasn’t in the conversation. But I managed to convince my parents that I should do an extra year at school because I always knew I might go and do something one day.”

When Tracey left school, she worked in a law firm for seven years, then decided to expand her horizons after working her way from office junior to financial manager.  After missing out on a few positions because she didn’t have a tertiary qualification, she decided to go to Massey University and study accountancy which she thought would open doors.

After getting her degree, she got a scholarship to do post-graduate studies in tax law and tax policy which sparked her interest in how policy and policy settings impact communities.

When an opportunity arose to work on a project at Whanganui Hospital, she returned home to Whanganui and stayed there until she moved north in 2018.

“It was a great place to combine career and parenthood as you could be anywhere in 10 minutes.”

Tracey also helped establish the Primary Health Organisation in 2003, which was another big piece of work.  For the next three years after that, she ran her own consultancy working across the central region DHBs on various projects, including procurement of elective surgery and laboratory services.

When the general manager Planning and Funding role came up at Whanganui DHB in 2006, she applied and returned to the DHB once again.

“It was my first GM role, and I was still in my thirties – so it was quite a fast track transition and a big thing to take on that early in my career.”

She said it was a steep learning curve with many challenging but rewarding projects, including the decommissioning of Regional Mental Health Intensive Rehabilitation and Extended Care Services.

“I was the sponsor for the project to decommission 25-bed inpatient beds and develop services in the community.

“I remember meeting with the Psychiatrists who said they had serious reservations about the project.  There was a lack of trust that we would ring-fence the funding from the decommissioning to develop adequate and safe services in the community, but we did exactly that and ring-fenced close to $3m to develop new models of care.

“The mantra was ‘whatever it takes, and we co-designed a model that delivered individualised solutions to provide support in the community.  It was a journey, and a matter of finding out what was important to service users and their whānau to reassure them that they would be safe and supported.”

In 2008, new chief executive Julie Paterson established a new structure at Whanganui DHB, and Tracey took on GM Hospital in addition to the Planning and Funding role.

She became part of a clinical and business partnership to run the Hospital.

“Instead of single accountability through a GM for clinical services, we had joint responsibility with the Chief Medical Officer, Director of Nursing,  Allied and Māori Health.  During this time, I worked closely with Northland DHBs current Chief Nurse and Midwifery Officer, Maree Sheard.  We all saw the benefits of the model, and it was cool to work under.”

During her time at Whanganui, Tracey held several national portfolios, including being a national lead for Aged Care and being part of the lead negotiating team to agree and implement the pay equity settlement for aged care and home support workers.  She was also Chair of the implementation group for the home support pay equity – but wasn’t able to see that through when she moved north, which was her one regret.

“The settlement was a massive thing for the sector. Health Care Assistants are a crucial part of the primary care workforce. There is a huge opportunity to recognise their role in supporting older people to remain well in the community. The pay equity settlement linked remuneration to professional development, and now there is an incentive for them to do more qualifications and move through the steps.”

In 2018, Tracey and her husband started making plans when the youngest of their three children left home.  They had connections in the North and decided it was time for a lifestyle that offered more work-life balance.

They relocated to Pataua North, which they love, and even though there’s a 45-minute commute, she said it is nothing like the weekly three-hour drive to Wellington she was used to.

Initially, Tracey took on a role as Manager for Democracy and Assurance at Whangārei District Council, looking after governance, internal legal function, risk and audit, community consultation and engagement, the Mayor’s office and the elections.  However, she underestimated how connected she was to the health sector.

When former colleague and Northland DHB chief executive Nick Chamberlain recommended she try out for her current role, she thought it was perfect, so she applied and got it. Since she has been here, she has loved every moment.

“I wouldn’t change it for anything. I love the Northland people. And it’s a nice community to be part of, even though it has its challenges.”

One of the things that attracted her to the role was that it spans service provision and planning, particularly elder health.

With Northland having the fastest-growing elderly and general population in the country, she sees an urgent need to put plans in place to support people in the community.

“If we look at what’s happening inside our hospitals, a considerable proportion of our patients are over 65.  We have to be doing something in the next 7-10 years because we have been at capacity almost every week since I’ve been here, and the new Hospital is some years away from being completed.  There is very little capacity in aged residential care and primary care, which places more pressure on the total system. That’s not something I’m going to shy away from just because changes are pending.”

When Tracey talks about her upbringing, she said that although her family had landed in New Zealand with nothing and lived from week to week, like everyone else around them, they were resilient and were part of a connected community.  So, she is interested in exploring how we create resilience and connection in communities.  Her experience is that you can withstand financial hardship if there is resilience and hope.

Much of her work has involved talking to patients and whānau about the things that are important to them.  Lack of access to services always comes up, but what has stood out to her is that people are looking for respectful relationships in their interactions with health services.

“They want to feel they are being heard and their needs are being met – not just health needs but that they’re being listened to and feel like that they’re part of the conversation.”

She also believes it is vital to use a common language to interact with people.

She experienced this first-hand when a person close to her got sick some years ago, and she realised the family had no idea what the clinical staff were talking about, “They just sat there and nodded their heads. It reminded me that patients and their whānau are what we are all here for, and we can never assume that we understand the barriers to people coming to use our services.”

She recalls the story of a mother of a large family with one child who had multiple health issues and health appointments. When they found out why the mother hadn’t been turning up for appointments, it was not because she couldn’t get there. Instead, it was because she didn’t understand what ENT stood for.

“When we talk about ENT and ophthalmology, why don’t we say ear clinic or eye clinic?  We need to try and see things from a patient’s perspective.”

She believes the reasons behind so many people ending up at the Hospital’s front door are complex and hard to influence.

“Being a parent to three 20 somethings, I know the thought of picking up the phone to make an appointment with a GP doesn’t occur to them.

They would rather use emergency services or urgent care services.”

She has also learnt that most people do not plan for what happens when they leave the Hospital, for example, after a visit to the emergency department.

“If they’ve come by ambulance, when it’s time to go home, they often assume because someone got them there, they’ll get them home.

“I can see that one of our strengths is the number of staff who have been here for a long time, often having grown up in Northland. They understand people’s realities and know people can’t just go and catch a bus back to Kaitaia. Our social workers do a stunning job helping our patients and their whānau to get things in order.”

When discussing the pending changes to the health system, Tracey hopes our staff will act as strong advocates for Northland. Her goal is to support them through the transition and says we need to make sure the good things we are doing don’t lose traction.

“We may need to speed them up a bit because we don’t know how fast things will move when these changes happen. Although the temptation is to think that we are going back to the future – I think what’s being proposed has the potential to realise gains for the community and improve equity. We have to be optimistic and make sure we don’t get lost in the decision making.”

“The need in the community here is huge, and there’s a lot of work to do.  I’m committed to Northland and working for Northland – it’s my home now.”